Information about the Stapleford Town Deal process and how residents, businesses and other stakeholders can get involved.

It was announced in September 2019 that £3.6bn is being made available to regenerate over 100 towns across the UK. Stapleford has been chosen as one of the towns to receive funding. Each town is set to receive up to £25m worth of investment in a number of areas.

The Government published a prospectus in October 2019 setting out the three areas of regeneration, the Towns Fund will focus on:

How will we get Stapleford a Towns Deal?

The Council, as the governing authority, convened the Executive Town Deal Board in January 2020. This Board to date has been working towards the creation and submission of Stapleford’s Town Investment Plan (TIP). This plan sets out the vision, strategy and outline projects for Stapleford.

To offer wider discussion with interested parties, a Stakeholder Group was also put in place during the development of the TIP. The role of this group was to support the production of the TIP; feeding views, wants and needs for Stapleford in to the Executive board.

Alongside this we have consulted with local residents, businesses and other interested organisations as to their own ideas and the ideas generated by the two boards. This feedback has been processed and is reflected in the final TIP document. This was submitted to Government on the 28th January 2021.

After a long period of deliberation, Government announced on Tuesday 8th June 2021 that Stapleford is set to receive up to £21.1m  of grant funding to implement the projects outlined in Stapleford's Town Investment Plan.

The timeline for the next steps in the funding process:

Further to these milestones, the Town Deal Executive board have a work programme with multiple opportunities for the public to directly input in to individual project development during the project detail phase.

The Council have convened the Town Deal Executive Board in line with the Government published Towns Fund Prospectus. The inaugural meeting took place on Friday 10th January 2020.

Meeting dates for 2021 are as follows:

Historic meeting agendas and minutes can be found on our Past Executive Board Meetings page.

On the announcement of the Towns Fund, the Government used the 'Stapleford BUASD' boundary provided by the Office of National Statistics, to initially define Stapleford. This is the geographic area to be represented by the Stapleford Town Deal board, where investments detailed in the TIP will occur. 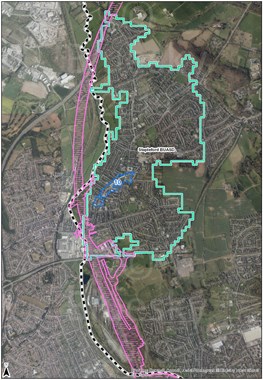