Back to Religious Exchange 2021

Ramadan is the name of the 9th month of the Islamic Calendar and can be 29 or 30 days depending on the lunar cycle.

Did you know: 3 of the 5 pillars of Islam promote physical well-being as well as positive mental health by making a person abstain from over indulging and focus on feeding their soul through prayer, patience and building good moral character. Muslims believe the reward of fasting is different to other religious practices in that it is innumerable and only Allah (God) will know the extent of its reward. As such Muslims see Ramadan as an opportunity for a renewal of faith as they strive in worship and repent with the hope to leave this month having been forgiven by Allah for their previous sins. 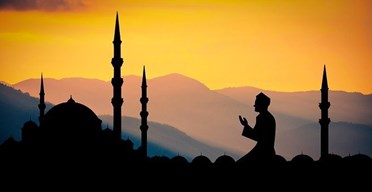 Who Celebrates Ramadan and Where?

Ramadan is observed by Muslims all across the world and ends with the 3-day celebration of Eid al Fitr (The festival of breaking fast, also known as the smaller Eid)

Did you know: Ramadan contains a night known as ‘Laylatul-Qadr’ which some scholars define as The night of decree. It is believed to be the greatest night of the entire year and even has a chapter dedicated to it in the Qur’an (ch.97). It is believed that Angel Gabriel (peace be upon him) descends with other angels and as some Muslim scholars believe, it would be this night in which a person’s (destiny) sustenance, lifespan,and other critical matters would be sealed for the coming year. The precise night on which Laylatul-Qadr occurs has not been mentioned however Muslims are told to seek it in the last 10 (odd) nights. Muslims will therefore spend the last 10 nights in extra worship and even in some cases spend that entire last third of the month in i`tikaf (seclusion in the mosque).

How Is Ramadan Celebrated?

Muslims will abstain from food, drink and physical relations from dawn to sunset. They must also ensure they do not cause any discomfort or harm to anyone as they focus on improving their inner and outer character.

People will gather in the mosques in the evening to pray the additional prayer of this month, Taraweeh where they will listen to the Qu’ran (The Muslim Holy Book) being recited in prayer over the period of the month. People may also choose to pray at home.

Though many know the month for fasting the month is also known as the month of the Qur’an and Muslims are encouraged to read and reflect on the message of the Qur’an during this time of physical and spiritual cleansing.

Did you know:  Taraweeh is a non-obligatory prayer but is encouraged by the prophet Muhammad (peace be upon him) and the word is derived from the Arabic word to ‘rest and relax’. It is a significant part of Ramadan, and like fasting requires one to be physically and spiritually mindful.

For those celebrating: Your Muslim colleagues, friends or families will be up to eat and pray at sunrise and so may be a little more tired during the day. Many will not be able to be with their loved ones due to lockdown. Consider how you may be able to support them in small ways that lets them know you are thinking of them, and share in their celebration by wishing them a blessed month.

Ramaḍân is the month in which the Quran was revealed as a guide for humanity with clear proofs of guidance and the standard ˹to distinguish between right and wrong˺. So whoever is present this month, let them fast. But whoever is ill or on a journey, then ˹let them fast˺ an equal number of days ˹after Ramaḍân˺. Allah intends ease for you, not hardship, so that you may complete the prescribed period and proclaim the greatness of Allah for guiding you, and perhaps you will be grateful. [Quran 2:185]