Hanukkah, also known as the festival of light, celebrates the rededication of the Holy temple and the miracles of faith.

Who Celebrates Hanukkah and Where?

Hanukkah is celebrated by Jews worldwide across the period of 8 days and is also referred to as Chanukah. 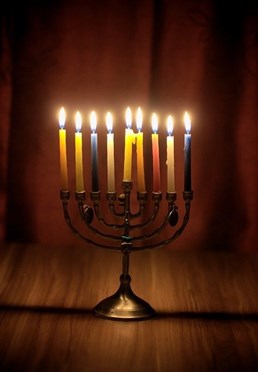 Hanukkah celebrates a miracle that took place in Jerusalem following the victory of the small number of Maccabee Jews against the large army of the Syrian King Antiochus, who would not let the Jews practice their religion in accordance to the 10 Commandments.

Once victorious, the Jews repaired their broken temple and rededicated it to God by lighting a lamp which was a symbol of God’s presence.

Did you know that the Jews only had enough oil for one lamp which miraculously lit for the period of 8 days and this is why it is Jewish tradition to light a candle for each of the 8 days Hanukka. This is done a nine-stemmed candelabrum called a Hanukiah or a menorah?

Hanukkah, begins on the 25th of Kislev on the Hebrew calendar which usually falls in November or December

How is Hanukkah Celebrated?

Hannukah is celebrated not only by the lighting of the menorah but also by giving gifts, playing games and sharing a meal – each of which has its own significance to the history of the event.

Did you know that Jews will make certain dishes during Hanukkah that are fried in oil such as latkes (potato fritters) to remember the miracle of the oil? There is also a tradition of playing games, such as the dreidel which is inscribed with Hebrew letters which form an acronym that translates the saying ‘a great miracle happened there.’

For those celebrating: this is a time of dedication to faith and the miracles it can harbour. It is also a time symbolic of the power of holding on to the light and hope in trying times. It will be a time when many would have faced the difficulties of the pandemic and will welcome the opportunity to celebrate with loved ones again and appreciate the warm wishes.

Contact
Customer Services
customerservices@broxtowe.gov.uk
tel: 0115 917 7777
A - Z of our services