In November 2016, the Government announced that Toton had been confirmed as the location of the East Midlands HS2 Hub Station.

HS2 is a high speed rail link connecting London to Birmingham, Manchester and Leeds. The East Midlands Hub Station at Toton will be situated on Phase 2b of the line which will connect Birmingham to Leeds. The Hub Station will have frequent services to Nottingham and Derby and will have links to existing rail and tram networks. The line and station are due to be completed between 2035 and 2040. 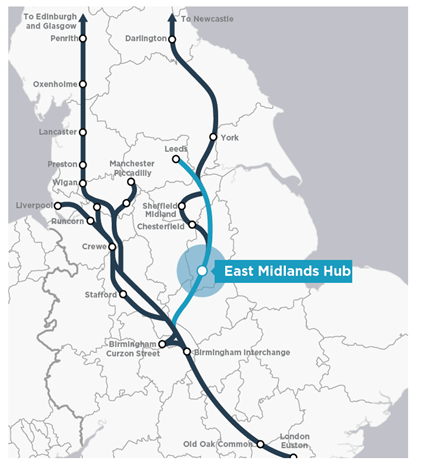 The land to the east of the station has been identified as a Strategic Location for Growth. This will include significant new employment and housing development.

The East Midlands HS2 Growth Strategy estimates that the arrival of HS2 could help provide 74,000 new jobs and add an extra £4 billion a year to the regional economy.

The latest position on HS2 East can be found on the HS2 East website (Opens in a New Window).

A route map can be seen to the right showing the East Midlands Hub in the centre of the network.

The Secretary of State for Transport and HS2 Ltd are responsible for the delivery of HS2 and undertake consultation in relation to HS2.

The Toton and Chetwynd Masterplan

The Council is working in partnership with Nottinghamshire County Council to create a Masterplan to achieve high quality development on the land surrounding the proposed Hub Station.

The Masterplan was subject to a six-week virtual consultation last year, to gather views from local residents.

Residents around Toton, Stapleford, Chilwell and Long Eaton, as well as the surrounding areas were asked for their views on plans for the area.

Following from this consultation, the comments received were used to help inform the writing of a draft Supplementary Planning Document (SPD). On 10th June 2021, the Council’s Jobs and Economy Committee resolved that, subject to minor amendments, the draft SPD should be published for the next stage of public consultation, which is expected to commence towards the end of August 2021.

A working group has been formed which is made up of Nottinghamshire County Council, Broxtowe Borough Council, Erewash Borough Council and Derbyshire County Council, alongside a Neighbourhood Forum. This group is committed to ensuring there remains a transparent and collaborative approach to any ideas or plans being suggested, which capitalise on the benefits of improved links with the area. A full consultation process will take place to ensure local residents have their opportunity to feedback on elements which are likely to impact them in the future.

The closure of the historic Chetwynd Barracks in 2024 and the start of works of HS2 Toton interchange has prompted planners to seek additional views ahead of a formal public consultation next year (2021).  The initial plans recommend the development of cycle pathways, green spaces, new schools, healthcare facilities and modern communities which offer affordable and carbon neutral homes.

Toton and Chetwynd Barracks is scheduled to close, opening the opportunity for major developments, whilst there are other major growth opportunities at Ratcliffe Power Station and East Midlands Airport, as well as the Toton hub station. The combined plans have the potential to create up to 84,000 jobs and 4,500 homes.

Combined, the three areas are the size of three Olympic Parks which will include: