Mobile Navigation
Broxtowe’s Towns are switched on for Christmas

Broxtowe’s Towns are switched on for Christmas 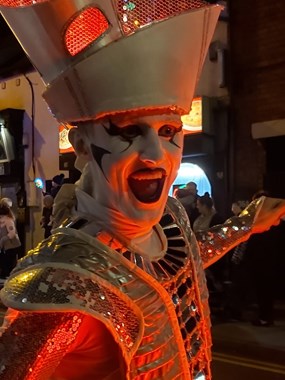 Organised by L Leisure events on behalf of Broxtowe Borough Council , Stapleford Town Council and Eastwood Town Council, this year’s events featured amazing performers, street theatre and music attracting large crowds to each town centre. Headline bands The Frandell’s, The Jaxx Band, and SKA’s were fantastic additions to the switch on’s with crowds singing along to well-known songs. Eastwood saw the amazing ‘Spark!’ performing; this fabulous drumming group proved to be a massive draw and attracted large crowds with their rhythmic, light show.

Christmas stilt walkers spread Christmas cheer throughout the streets and Santa made an appearance at all three events. The beautiful Christmas Fairy arrived for another year at the D.H. Lawrence Birthplace Museum where she welcomed children to her winter wonderland in order to hear their Christmas wishes. Afterwards, the children experienced the museum, which was decorated in the style of an authentic Victorian Christmas.

The fairground rides are always a great hit for the kids and this year was no exception; The new funfair location in Beeston proved to be a great success. What’s more, the charity stalls had some fantastic tombola prizes and sweet treats for the visitors to sample. Stapleford Churches Together ran a treasure hunt from their stall; a great addition to the Stapleford Switch on.

The lights were switched on by the Mayor of Broxtowe and each Town Mayor, with huge crowds gathering for the countdown before the Christmas trees and decorations were lit . Each event concluded with a spectacular fireworks display which also symbolised the end of this year's events delivered by L Leisure.

Keep a lookout for next years events organised by L Leisure including The Hemlock Happening, Summer Play Days, Reel Outdoors and Mini Reel cinemas as well as Spooktacular Fireworks