21/10/20 - The Stunning interior of Beeston’s new cinema has been revealed in the latest graphics from the cinema’s operator.

The Arc Cinema on Beeston Square – which is scheduled to open next year – will have eight state-of-the-art screens, with luxury electric recliner seating and laser digital projection with 3D capability. 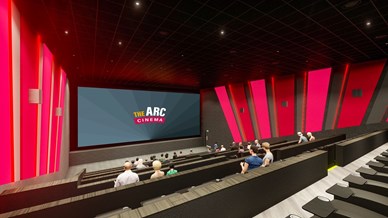 All the screens feature a Dolby Digital sound system and will be fully licensed so customers can enjoy a drink while watching their film.

The cinema will also have multiple seating areas in addition to a high specification café bar in which customers can meet to rest and relax, acting as a gathering point for the local and wider community.

The cinema forms the cornerstone of the Beeston Square development, which is led by Broxtowe Borough Council and also features food and beverage units, public spaces and 132 new homes.

Cllr Steve Carr, deputy leader of Broxtowe Borough Council, said: “When we were initially seeking an operator for the cinema, The Arc Cinema’s vision stood out and that has been delivered on with these designs.

“The interiors look absolutely fantastic and will provide a real showpiece for the Beeston Square development. At a time where there has been a lot of uncertainty in the entertainment and hospitality sector, we’re delighted with how things are progressing and are looking forward to being able to open the square next year.”

Cllr Greg Marshall, of Broxtowe Borough Council, said: “This project is of huge significance to both Beeston and Broxtowe as a whole. A high-quality cinema will bring extra footfall into the area, at a time when it is very much needed.

“Beeston Square will revitalise the post-5pm economy in Beeston and this cinema will play a very big part of that – we’re all really excited and can’t wait to see the benefits this will bring.” 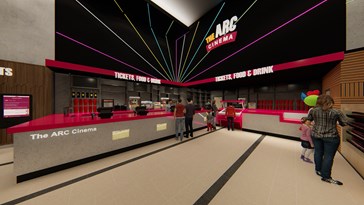 Brian Gilligan, director at The Arc Cinema, said: “We were delighted to be selected by Broxtowe Borough Council to provide Beeston with a great new cinema and we would like to express our grateful thanks to them for their support in helping make this possible.

“The facilities have been specially designed to ensure we become a leisure hub, enabling us to provide a focal point for the people of Beeston. We recently opened refurbished cinemas in Hucknall and Peterhead which have been very well received Our customers there love the fact that we offer a luxurious VIP experience, but we only charge standard cinema prices, and we are committed to bringing that unique combination to this brand new cinema in Beeston.”

Work on the multi-million-pound redevelopment has progressed over the summer despite the challenges presented by the coronavirus pandemic, with the exterior of the cinema expected to be complete in December.

The keys will then be handed to The Arc Cinema for interior fit-out, ahead of the planned opening in June.

For more information, visit the Beeston Square webpage or view a flythrough video of the new visuals below.