16/12/2021 - A party atmosphere will take over Beeston as the town holds its first Light Night at the end of January.

The unveiling of a brand-new piece of neon street art (on Saturday 29 January) will form the centrepiece of the event, which is designed to showcase all that the creative town has to offer. The evening will also include large scale video projections on buildings, live music, fire spinning and more. 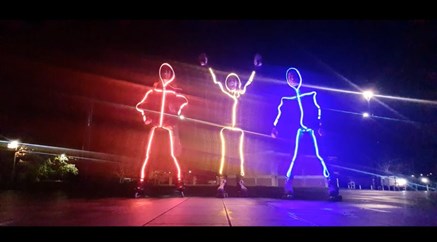 The Light Night concept, designed to entice people to explore town and city centres on darker winter evenings, began in Europe and has become increasingly popular in the UK over the past few years, with Nottingham holding one every year since 2008.

This is the first time Beeston has held its own. It comes as the town centre has undergone a £50million transformation in the form of the Beeston Square development, which is already home to a multiplex cinema and will soon house a number of new bars and restaurants.

Local singer songwriter Jeanie Barton has organised the community led event, which will take place on January 29, alongside Broxtowe Council.

She said it felt like the right time for Beeston to celebrate. “This is the perfect opportunity to literally shine a light on Beeston’s wonderful creative community, and to bring some cheer in to people’s lives during the long, dark month of January,” she said.  “It’s been a transformational few years for Beeston and we’re looking forward to welcoming people into the town to showcase all it has to offer. It’s a great way to celebrate being together again after a difficult period for everyone.”

Jeanie, who started the town’s Beeston Street Art group in 2017 is particularly excited about the unveiling of their new permanent light installation, which will be their 43rd artwork. The neon sign facing the tram interchange will read “#alightinBeeston”.

“It emphasises all that’s been achieved in our town,” says Jeanie. “Things really are alight and vibrant, Beeston has become a destination; somewhere people want to come now, rather than ride straight through.”

The event will feature a specially commissioned, locally-made film by director Katie Dawson on the precinct, as well as an immersive edition of the Beeston Film festival in the Parish Church on Middle Street.

This will showcase numerous submissions including a short film called The Year of the Roses, produced by Italian photographer Roberto Alborghetti, following a collaboration with Marysia Zipser from Beeston’s Art Culture Tourism (ACT) group.

Roberto, who is also an award-winning journalist and the official biographer for Pope Francis has had a long-standing connection with the town, first visiting in 2014.

Marysia said: “We’re very excited to welcome Roberto back to Beeston and to share this new film with everyone. It features contributions from across the world and stems from an initial post I put on social media during lockdown, asking people to share pictures of the roses in their garden and what they mean to them.”

Broxtowe Borough Council CEO Ruth Hyde agreed: “The community-led civic art installations in Beeston have a sense of energy and vibrancy which reflects the character of the local community. The quality and durability of the work is outstanding, eye-catching and appealing, adds an interest and vitality to the street scene and contributes to making Beeston even more unique than it already is.”