22/07/21 - More than 100 new jobs will be created in a Nottinghamshire town thanks to a landmark new development.

The redevelopment of Beeston Square, masterminded by Broxtowe Borough Council, is currently home to the Arc Cinema, which opened its doors in May.

It will be joined by a new branch of Doughnotts at the end of August and a new bar from the team behind the Hockley Arts Club, in the autumn. Announcements on the final two tenants in the development are expected to be made in the coming weeks

In total, the three venues will employ 95 staff once fully up and running, with the fourth expected to take that number to over 100.

Dan Byrne, Marketing Manager for Doughnotts, said opening its fourth – and largest – store in Beeston was an easy decision. 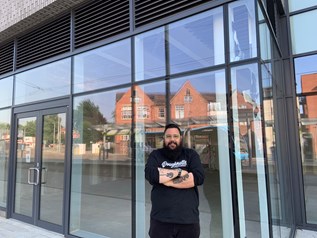 “Beeston is such a vibrant and up-and-coming town and there’s such a friendly community atmosphere about the place,” he said.

“We’ve had a stall at the farmers’ market there for a couple of years and the welcome we’ve had has been amazing. There’s been nothing but positivity from the people of the town and when we found out this development was happening we knew it was somewhere we wanted to be.”

The store, which is due to open on August 28th, will be the company’s biggest shop so far with space for more than 20 people to sit inside, as well as an outdoor seating area. They will also be offering the chance for people to grab a coffee and doughnuts on the go, employing specially-trained baristas – something they have yet to do in their other stores. In total there is expected to be around 10 members of staff.

Daniel Ellis, of Fletchergate Industries, which is bringing The Beeston Social to the Square in the autumn said he hopes the venue will create around 70 jobs.

He said: “You can feel the buzz around Beeston, it’s being invested into and with that brings development.

“There’s a really diverse community. There’s always been a lot of students but now the young professionals are settling which in turn is contributing to the fierce drive in property prices.

“These are the factors driving us there and we feel it’s becoming a really exciting place to be. We’re proud to be part of this next phase in Beeston’s future.”

Caroline Smith, General Manager of the Arc cinema, said the cinema’s first few months have been a great success.

“It’s been fantastic. We’ve had a wonderful response from everyone and it’s lovely to be part of the community,” she said.

“We already have some regular customers that just come and sit in the café area and watch the world go by, and we’ve had lots of requests about community film screenings and hosting events, which is great.”

The cinema currently employs 15 staff, many of whom – Caroline included – come from Beeston.

Councillor Greg Marshall, from Broxtowe Borough Council’s project board, said: “It’s fantastic to see these great local businesses investing in Beeston. Our Town Square redevelopment is not only helping to bring new and exciting entertainment and leisure facilities to our town, it’s helping local businesses to expand and thrive, and creating lots of new jobs too.

“This is community wealth building at its best, which has always been one of the most important aims of this project.”