05/03/21- Mayor of Broxtowe, Councillor Janet Patrick has thanked the local community for the vital support it has shown to various fundraising appeals over the last few months.

Around £30k has been raised as part of two appeals to support vulnerable people and the organisations helping them since the start of the pandemic. 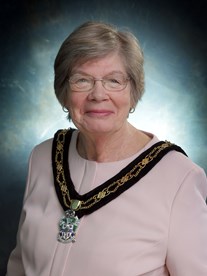 In May, Councillor Patrick supported the Broxtowe Community Appeal to raise funds for voluntary and community groups who were helping vulnerable residents get by during the first lockdown.

In December, the Mayor’s Christmas Hamper Appeal supported 400 families in Broxtowe with food hampers, as well as over £14,000 worth of vouchers to be spent in a range of local businesses. This helped not only local people in need but also the local economy.

Over £2,000 has also been raised for Citizens Advice Broxtowe, Councillor Patrick’s chosen charity, with fundraising activities including a Bake a-Long event and a Great Cycling Challenge that took place in Gran Canaria covering 60 miles.

“I came into office in May 2020, just as the first Mayor’s Appeal had begun. I was overwhelmed both by the funds raised from businesses, charities and so many local people and all the community work I saw in Broxtowe,” said Councillor Patrick.

“My motto for the year has been ‘Let kindness continue’ and this is certainly something I have seen in our local community throughout the last year. I have been left very humbled that the pandemic has brought out the best in us.

For more information about the Mayor, visit www.broxtowe.gov.uk/civic