The Arc Cinema in Beeston officially opened its doors to the public on Friday May 28th, just in time for the bank holiday weekend. 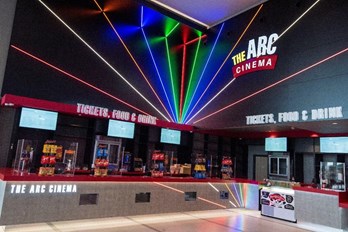 A launch event to celebrate the opening of the new cinema was held on Thursday27 May with members of Broxtowe Borough Council and other invited guests in attendance. Shane Meadows – acclaimed director and Beeston local – formally declared the cinema open before a screening of his award-winning film “Somers Town”. Shane said,

“I am really chuffed for the people of Beeston that such an amazing facility has opened in our town centre. Beeston is a fantastic place to live and having access to a local cinema will be great for the community. The Arc will make visiting the cinema, to watch the best films on offer, way more accessible. They’re already getting local schools involved too so hopefully the kids of Beeston will be inspired to tell their own stories and have opportunities to learn more about the industry too!”

The Arc Cinema opening is part of Broxtowe Borough Council’s long-term £50million plans to boost Beeston town centre and will also include a new residential area. Backed with funding from D2N2, the new Beeston Square, in the centre of the town is set to attract more and more people to stay local and support the town.

Only last week Fletchergate Industries who own iconic venues such as Nottingham’s Hockley Arts Club announced they would be opening their ‘Beeston Social’ within the development. Further tenant announcements are expected shortly.

“This development has been a long time in the making and we are thrilled that the time has come to open its doors. This is community wealth building at its best, a Council backed initiative that works closely with business and developers to secure jobs and long term economic gain for Broxtowe . Everyone has faced a difficult time during COVID so we’re delighted that the Arc Cinema decided to invest in Beeston. We want local businesses and communities to thrive and be proud to call this town their home.”

Lucky winners of a competition to catch a preview screening of A Quiet Place 2 were also at the event.

The cinema has 700 luxury leather electric reclining seats in total and laser digital projection and Dolby Digital 7.1 surround sound in 6 of its 8 screens.

The remaining two screens boast the company’s, new to market, giant Hypersense format which uses 4k laser projection and Dolby Atmos to convey the drama of every scene with maximum impact and precision.

Caroline Smith- a local resident and newly appointed manager of The Arc Cinema - is committed to delivering a hugely enjoyable leisure experience to the people of Beeston.

“I am thrilled to finally be able to welcome people to their new cinema. We have a great team of people here who can’t wait to start making cinema going in Beeston an event to remember. 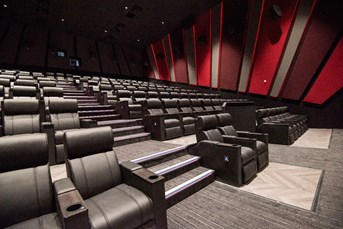 We will be joined at Beeston Square by our new neighbours Beeston Social and with more announcements on the way we’re excited to be playing our part in establishing Beeston Square as the best destination for high quality entertainment, food and drinks with real individuality and personality.

All the relevant COVID-19 restrictions will be in place obviously but we are certain that they won’t detract from the overall experience. We are really looking forward to seeing everybody.”

Access for all is key to The Arc Cinema’s offer with all screens wheelchair accessible and subtitled screenings, kids’ clubs and parent and baby screenings part of the offer. There is also a café bar area plus all the screens are licensed so you can enjoy a beer or glass of wine while watching the film.

The cinema will show the latest blockbuster and independent films as well as broadcast screenings of opera, ballet and theatrical productions. The opening week’s line – up will include A Quiet Place 2, Cruella, Peter Rabbit 2, The Conjuring: The Devil Made Me Do It and Nomadland.