The Mayor of Broxtowe, Councillor Richard MacRae, was joined by Deputy Lieutenant Judith Swann to raise the Red Ensign flag outside the Council Offices in Beeston.

They were joined by other guests including Leader of the Council Milan Radulovic MBE and Broxtowe MP, Darren Henry. 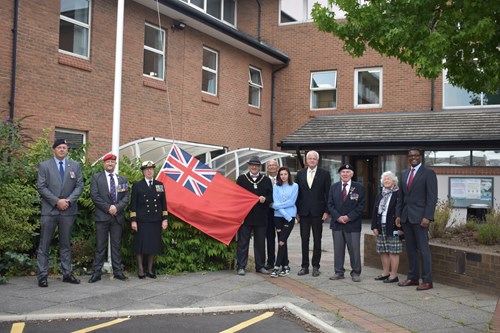 At the same time, hundreds of places across Britain also took part in Seafarers UK's Fly the Red Ensign campaign, to honour those who kept our nation afloat during both world wars, and to celebrate the modern day Merchant Navy seafarers who are responsible for 95% of the UK’s imports, including half the food we eat.

Since the start of this century, 3 September has been the UK’s designated Merchant Navy Day.

In recent years, our nation’s dependence on the Merchant Navy has increased. 95% of our imports are carried by ship. Without regular fuel imports our power stations would soon shut down. And with more sea ports and harbours and a longer coastline than any other European country, we depend on the Merchant Navy to ship more than 75% of our exports.