09/08/2022 - Five Broxtowe open spaces are celebrating after it was announced they have retained their Green Flag awards.

The five parks that have been awarded are: 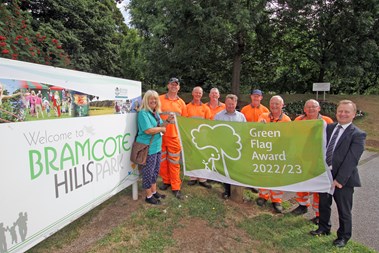 Bramcote Hills Park has been awarded a green flag every year since 2006 and Colliers Wood has had one every year since 2008. The Green Flag Awards recognise and reward the best parks and green spaces across the country. A Green Flag is a sign to the public that the space boasts very high standards, is well maintained and has good facilities.

This is the first year that Bramcote Hills Park has been judged in person since the pandemic and it has been highly praised. Sites and management plans are appraised by experienced judges in the management of Green Spaces. All sites are scored across various areas which reflect on how it is being managed, ensuring that it is a safe welcoming place for people to come and visit.

The role the Friends Groups and the Community play in helping to manage and develop these sites was seen as very important as well as the high standards achieved.

Portfolio Holder for Environment, Councillor Helen Skinner, said: “We are proud to announce that five of our open spaces have once again been awarded a Green Flag. This demonstrates the care we put into our Green spaces to ensure they are always going above and beyond the standards that are expected of them.”

For more details of the parks and open spaces in Broxtowe Borough visit the website at www.broxtowe.gov.uk/parks or contact 0115 917 3643 or email grounds@broxtowe.gov.uk.