14/12/22 - CCTV is set to be installed at a block of flats affected by antisocial behaviour, as part of a range of measures to make people safer in Eastwood.

Automatic number plate recognition cameras will also be installed at key locations to help police track criminals using the town’s road network, while two car parks will have their security beefed up to prevent vehicle crime. 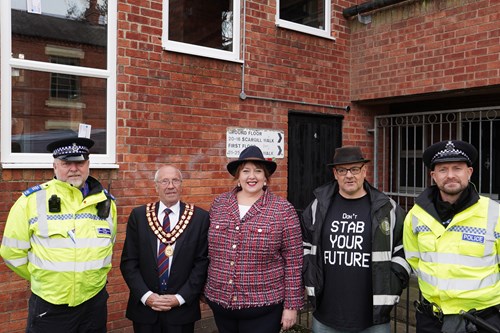 Meanwhile, Nottinghamshire Police’s Neighbourhood Police Officers in Eastwood have been kitted out with electric bikes using some of the funding – allowing them greater ability to get out in the community to detect crime and give a reassuring presence.

It comes after the Office of the Office and Crime Commissioner secured more than £200,000 for the Eastwood South area through the Home Office’s Safer Streets fund – which aims to tackle neighbourhood crime and antisocial behaviour and violence against women and girls.

A total of £112,000 has been set aside to pay for fixed and mobile CCTV cameras to prevent crime and antisocial behaviour in the area.

Around £20,000 of this will be spent on installing CCTV cameras at Scargill Walk flats, to deter antisocial behaviour, including drug taking on the stairwells. The metal grilles on the windows of the flats will also be changed for double glazing, while the painting and lighting will be refreshed, making residents feel safer in a brighter and lighter environment.

Car parks in Victoria Street and Alexandra Street will also be given funding to help them reach the national Park Mark accreditation, which recognises standards of excellence in its measures to prevent vehicle crime.

Police and Crime Commissioner Caroline Henry, who grew up in Eastwood and still lives down the road in Giltbrook, said: “I am delighted to be able to bring this national Safer Streets funding to Eastwood to help improve safety and feelings of safety. There is no favouritism here – the data shows Eastwood needs it most.

“Each of the eight local authority areas in Nottinghamshire has benefitted from some funding through this latest round of Safer Streets money, and the areas chosen for interventions are based on crime data, which identified where funding could be put to best use to have the biggest impact.

“My office has worked closely with Broxtowe Borough Council on this successful bid and we will continue working side-by-side to implement these plans, identifying where we can have the biggest impact on safety and giving residents further reassurance on the streets of Eastwood.”

Eastwood is one of three areas in the Nottinghamshire South Community Safety Partnership area to benefit from a share of £750,000 in Safer Streets funding. The money will be split three ways by Broxtowe Borough Council, Gedling Borough Council and Rushcliffe Borough Council for projects that will help make people who live, work and visit their areas feel safer.

Councillor Richard McRae, Broxtowe Borough Council Portfolio Holder for Community Safety and a member of the Police and Crime Panel, welcomed the funding.

“There’s going to improvements to CCTV cameras and security in places where people live including toughened glass windows,” he said.

“The PCSOs in Eastwood do a cracking job and they are an asset to the community and it is just nice that they have got some help from the Safer Streets fund.”

Broxtowe Borough Council Chief Executive Ruth Hyde OBE said: “We are delighted with the success of our Safer Streets bid for Eastwood. The funding secured will enable us to introduce some much-needed measures to prevent antisocial behaviour and enable people in the area to feel safer when they are out and about in the community.”

He said: “We worked in partnership with Broxtowe Borough Council and the Police and Crime Commissioner’s Office to formulate a bid that worked for the community.

“As part of the bid preparation, I sent my officers out to ask questions and listen to local residents’ feedback on the improvements that were needed in the Eastwood South area. We then used that information to identify projects and initiatives that would bring real long-term benefits to the area.

“The money has also allowed my policing team to invest in new technology, including electric bikes, which will improve our ability to get out and about in the community and detect crime.”

The Office of the Police and Crime Commissioner for Nottinghamshire was also successful in three other bids for £750,000 for Safer Streets projects for:

It means the Office secured a total of £3m in Safer Streets funding for Nottinghamshire, the highest amount of any policing area in England and Wales