Fly A Flag For The Commonwealth In Broxtowe Borough 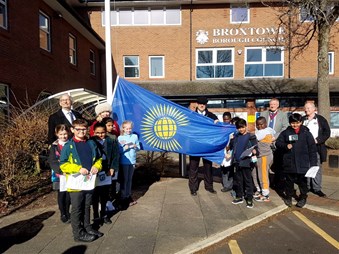 The Mayor of the Borough of Broxtowe, Councillor Richard MacRae, Deputy Lieutenant of Nottinghamshire, Judith Naake MBE and students from Round Hill school raised the Commonwealth Flag outside the Council Offices in Beeston at a special ceremony at 10.00am on Monday 14 March 2022. A message from Her Majesty The Queen and a specially written Commonwealth Affirmation were read out at the ceremony before the raising of the Commonwealth flag.

The theme for Commonwealth Day 2022 was centred around the theme for the forthcoming Commonwealth Heads of Government Meeting – ‘Delivering a Common Future’ – which highlights how the 54 member countries in the Commonwealth family are ‘innovating, connecting and transforming’ to help achieve goals like fighting climate change, promotion good governance and boosting trade.

Commonwealth Day is also a significant day in the royal calendar. The Queen takes her role as Head of the Commonwealth seriously, and throughout her reign has continually reinforced its importance. Given that it is Her Majesty’s Jubilee Year, there was special focus on the role service plays in the lives of people and communities across the Commonwealth.

Visit https://thecommonwealth.org/commonwealth-day for more information about the Fly a Flag for the Commonwealth initiative.