12/5/2022 - Councillor David Grindell was installed as the 46th Mayor of Broxtowe last night (11th May) at the Annual Meeting of Broxtowe Borough Council. 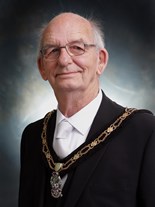 In 2005, David became a town councillor representing the Stapleford South East Ward on Stapleford Town Council and first elected to Broxtowe Borough Council in 2011. He served as the Town Mayor of Stapleford twice and as the Deputy Mayor of Broxtowe during 2021/22 Civic Year.

“I’m deeply honoured to take up the role of the Mayor and look forward to meeting as many residents as I can. During my year in office I will support the work with Mental Health in the community of Broxtowe based in Middle Street, Beeston as well as The White Ribbon campaign to end all violence towards women.” said Councillor Grindell.

David takes over from outgoing Mayor, Councillor Richard MacRae, following his successful year in office which saw him undertake 211 engagements and raise over £5,700 for Broxtowe Youth Homelessness.

If you would like to support the Mayor’s chosen charities or invite the new Mayor to a special event, please contact Broxtowe Borough Council on 0115 917 3210, email civic@broxtowe.gov.uk or visit www.broxtowe.gov.uk/civic