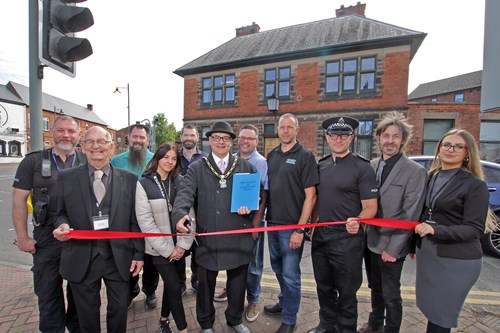 Broxtowe Borough Council developed the old Police Station thanks to funding from D2N2’s local Growth Fund. The site, which has been vacant for several years, has been refurbished into nine affordable offices of varying sizes, as well as kitchen and break out facilities. The facility provides an opportunity for new or expanding businesses to have an official office space in which to grow, right in the heart of Stapleford.

The Stapleford Business Hub is the second which has been developed by the Council and follows on from the successful hub in Beeston. As well as affordable rent and rates, the new hub will benefit from dedicated business support, intercom system and parking. The shared space will also offer fantastic networking opportunities with other businesses in the hub.

The new hub is just part of an exciting future for Stapleford. Following from the success of the business hub, the Stapleford Towns Deal is funding an upcoming enterprise hub which will offer affordable high quality offices on the first floor. Furthermore, the Town Centre Recovery Fund is now open to support businesses and has already granted funds for private sector development of new office space at 20 Derby Road. These projects respond to the booming office space demand within Stapleford and intend to help the local retail economy to prosper.

Councillor Tim Hallam, Chair of the Jobs and Economy Committee has said: “The business hub in Beeston has been really successful so its great news that a similar facility will now be able to support growing businesses in Stapleford. With the Town Deal, Stapleford is a really exciting location perfect for new businesses and startups.”

Currently there are no vacancies at the hub at present. Any further enquiries should be directed to Nick Hawkes at Nick.hawkes@broxtowe.gov.uk.

Contact
Economic Development
economic.development@broxtowe.gov.uk
A - Z of our services