Military To March Through Eastwood For Freedom Parade

27/05/22 - Wednesday 22nd June will mark an historic day in Eastwood, as soldiers and veterans from 170 (Infrastructure Support) Engineer Group march through the town centre to exercise their Freedom of the Borough and celebrate the Queen’s Platinum Jubilee.

The town will be dressed in red, white and blue bunting and residents and businesses are urged to take to the streets to cheer on its Army heroes as they march through the town at 1.30pm. 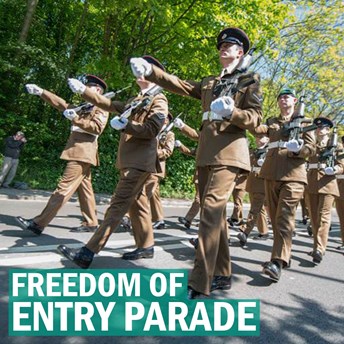 Councillor Milan Radulovic MBE, Leader of Broxtowe Borough Council said: “After the social restrictions over the last few years, I’m thrilled that we can bring this event to the Borough as a way to honour our armed forces and her majesty the Queen. Their devotion to serving others is remarkable and I know that Eastwood will give them the rousing welcome that they deserve.”

The parade, will also fall during Armed Forces week and is an opportunity for the unit to exercise their Freedom of the Borough, which was bestowed on them in 2009.

Freedom of Entry allows military units to march through the borough in recognition of their outstanding achievements, commitment and dedication in the service of this country and as an expression of the high regard in which they are held by the Council and members of the community.

The parade is being organised by Broxtowe Borough Council and Eastwood Town Council, with support from local organisations. Schoolchildren will also be in attendance on the day.

As the route will be closed for the Parade there will be some traffic disruption.

For more information about the Parade contact the Civic Office on 0115 917 3210, email civic@broxtowe.gov.uk.