17/11/22 - A 96 year old who has been supporting sick children at QMC for more than 15 years was amongst seven local people to be honoured last night as Broxtowe Borough Council admitted new Freemen and Aldermen of the Borough. 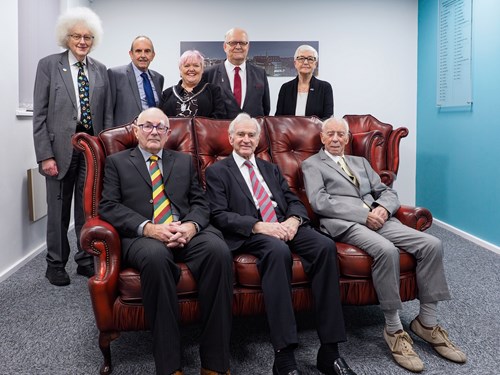 Kenneth Storer, from Giltbrook takes a bus and a tram to the hospital to deliver donated paper and supplies to the wards for the children to use for activities to keep them entertained during their stay.

Kenneth, affectionately known by staff and patients as ‘Mr Sunshine’ for his warm and caring nature and ability to brighten up everyone’s day, has visited daily for 15 years. The only thing that has ever stopped him was the pandemic.

Joining Kenneth as new Freemen of the Borough are:

Former Borough Councillor, Ken Rigby was also made an Alderman of the Council at the ceremony, for over two decades of dedicated service to the people of Broxtowe in which he championed local need and bridged the gap between the Council and its residents.

Broxtowe Borough Council is able to bestow the award of Honorary Alderman, Freeman of the Borough and Freedom of Entry on individuals who have made a significant contribution to the community.

The titles of Honorary Alderman, Freeman and Freedom of Entry are the highest honours that this Council can bestow. This capability was granted to the Council when it received borough status in 1977.