30/09/2022 - A new park has opened opposite Ghost House Lane in Chilwell, providing 5,000 square metres of green space for local residents to enjoy.

The new ‘pocket park’ also includes seating and a picnic area, complementing the adjacent green space at Inham Nook Recreation Ground and is well known locally, following a series of strange happenings that led people to believe the 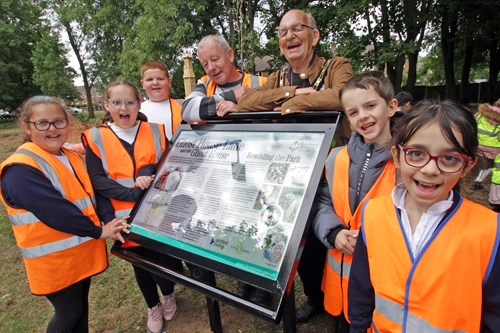 Local chainsaw sculptor, Peter Leadbeater, has been be on site to create a special log carving to reflect the site’s spooky history - an idea which was suggested as part of consultation work with local schools, Sunnyside Spencer Academy and Eskdale Junior School.

Wildflowers were planted at the site, which have been chosen by Chilwell West, the ward that accumulated the most points on the Green Rewards platform. Every six months the top performing ward gets to choose from one of four biodiversity prizes on offer. Chilwell West chose wildflowers and these were  planted with the help of pupils from local primary schools - Eskdale Junior School, Sunnyside Spencer Academy and Alderman Pounder Infant and Nursery School.

The project has been made possible with a donation from United Living, the Council’s modernisation partner.

Portfolio holder for the Environment, Councillor Helen Skinner, has said “The new pocket park will bring many benefits to Broxtowe. As well as increasing areas of informal grassland and encouraging wildlife to flourish, we hope the park’s location will attract many visitors who will be captivated by Ghost House Lane’s fascinating history.

It is also fantastic to see the efforts of Green Rewards users in action as this sustainability project is put in place, and it is great that a new generation of residents have been involved in the planting of the wildflowers.”

Green Rewards is a free platform where users can accumulate points for recording sustainable actions such as recycling, walking and reducing the amount of energy they use. These points can then be exchanged for vouchers and prizes. Find out more at www.broxtowe.gov.uk/greenrewards.