Information on the Beeston Square Redevelopment.

Work is well under way for Phase 2 of the redevelopment of Beeston Square.

The second phase will see an eight-screen cinema, as well as food and drink outlets and 132 new homes.

The project is also being supported by the D2N2 Local Growth Fund pt 3 N2TC Fund.

The scheme forms the second phase of a £50 million development, with Phase 1 including the refurbishment of the shopping precinct, new and improved public transport connecting the town to the NET tram network, more retailers, cafes and a gym.

The designs are available to view online:

The journey so far…

Redevelopment of Phase 1 opened and a public consultation took place on initial plans for Phase 2.

The Council purchased the leasehold interest of Beeston Square in a multi-million pound deal to help secure the future development of the town.

Preparatory works began including preparing a planning application, finding a suitable developer for the residential part of the site and continuing negotiations with a cinema operator. 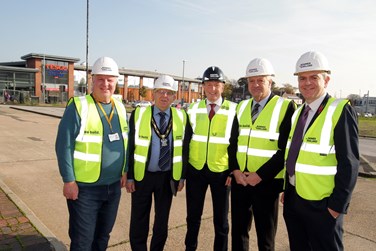 Arc Cinema secured as the operator of the eight-screen cinema which will be built as part of Phase 2. 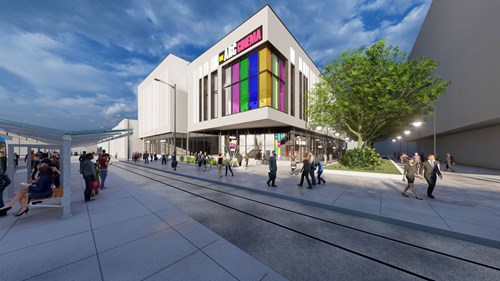 Bowmer + Kirkland announced as the contractor for the cinema and retail elements of the project.

Work starts on site for the cinema and retail elements.

Progress on the cinema has been slowed by the Coronavirus pandemic, which caused delays in the building work and the delivery of materials to site but it has been announced that it will be handed over to the operator before the end of the year, ready for fit out.

The Council is working on meanwhile uses for the remaining units on the site to provide activity and footfall, helping to get the cinema off to the best start and supporting existing businesses in Beeston town centre as they recover from lockdown.

The stunning interior of Beeston's new cinema has been revealed in the latest graphics from the cinema's operator.

Beeston’s new deluxe cinema, the entertainment centrepiece of a £50m redevelopment, is on track to light up Beeston this summer, as the finished building is officially handed over to new owners, The Arc Cinema.